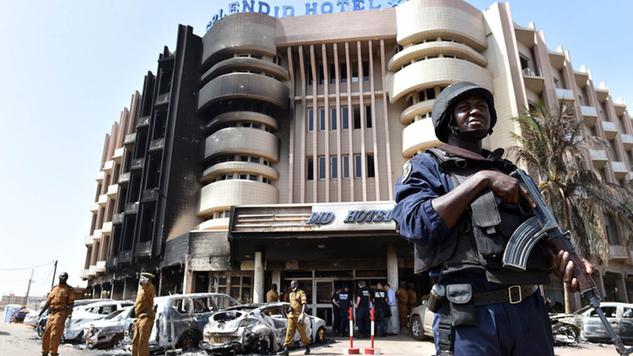 The horrific scenes were of flames rising from Ouagadougou’s Hotel Splendid, of bodies being removed and the injured being taken to the hospital. They remind the viewer--and remind the world—that perhaps all is not yet secure, in this sleepiest of West Africa’s inland capitals.

I had occasion to visit “Ouaga” (as it is called by the locals), by train from Abidjan and Bobo Dioulasso, nearly four decades ago, after participating in the second Congress of the Africa Travel Association, in Abidjan’s Hotel Ivoire. In that time, Burkina Faso’s capital has grown from a sleepy city of (as I was told) barely 100,000 to one of some 1,475,000 inhabitants.

The United Nations Security Council seemed to be taking a “wait and see” attitude on the developing--and possibly stabilizing--situation in Burkina Faso, if recent action--or lack thereof--is any indication. In the light of the inauguration of President Roch Marc Christian Kabore as President, they were pointedly declining to put any discussion of the West African republic on the Council’s agenda. It remains to be seen how this latest outbreak of violence will affect their interest.

The immediate story of Burkina’s latest troubles began on 18 November 2014, with the removal of long-time President Blaise Campaore. Campaore had been in power since the coup of 1987, in which the previous President, Thomas Sankara had been deposed and thereafter killed, “by accident” (The circumstances of Sankara’s death are said to have “never been adequately investigated”.). After being installed as President, Campaore proceeded to abolish many of the former Marxist policies of the charismatic Sankara. Campaore was then elected in four successive elections, in 1991, 1998, 2005 and 2010 In the process, the presidential term was reduced from seven to five years.

On 30 October 2014, a meeting was held, at which Campaore attempted to change the Constitution to allow him a further presidential term. This led to mass protests and the storming and burning of the parliament building. On the following day, 31 October, Campaore resigned the presidency and flew to the Cote d’Ivoire. A presidential guard officer, Yacouba Isaac Zida, was installed as “interim president”. Then on 18 November, former U.N. Ambassador Michel Kafando was appointed “transitional president”.

In September 2015, Kafando was briefly deposed, but then restored to office—largely through the efforts of the Economic Community of West African States (ECOWAS).The United Nations Security Council appeared to breath a collective sigh of relief, commending Kafando’s restoration and praising ECOWAS’s role.

Michel Kafando is one of the more interesting, most competent, and best-educated leaders to come out of Burkina Faso, and even out of the larger pantheon of Francophone West African leaders. Born in Ouagadougou in 1942, he holds a Bachelor’s degree in Public Law from the University of Bordeaux, two further degrees in Political and International Studies, and finally a PhD in Political Science from the Sorbonne (University of Paris) in 1990.

Kafando served as Foreign Minister, 1982-’83, and was elected a Vice-President of the United Nations General Assembly during that period. He later served for 13 years as Ambassador to the United Nations. As such, he was well-known to this correspondent and many of his colleagues, particularly during his two terms as President of the Security Council, in August 2008 and December 2009. Thus, when President Campaore was sent into exile last year, and an experienced politician/diplomat was needed to be interim leader, Kafando seemed a logical choice.

At first it was thought that Kafando would stand down as interim leader and run for President himself, but he declined to do so, and in November 2015, Roch Marc Christian Kabore was elected President of Burkina Faso. He was installed in office on 29 December.

President Kabore is a somewhat less-known quantity than his “predecessor”,  Kafando. Born in in Ouagadougou in 1957, he was educated there and in France, where he obtained a B.A. and M.A. in Economics from the University of Burgundy in Dijon. He had been a Minister previously, and was made Prime Minister in 1994. When a new political party, the “Congress for Democracy and Progress” was formed in early 1996, Kabore resigned as Prime Minister to be the Party’s First Vice-President. Thus, he was a veteran both of executive positions, and the country’s various political wars. This was the man—believed to be eminently qualified—chosen to run for president, and who was elected and sworn in, at the end of 2015.

Meanwhile, the Security Council—and the World—nervously watch…and wait. And the authorities have announced that three of the perpetrators of the attack on the Splendid Hotel have been apprehended…but that another three are still at large.