As the 70th Session of the United Nations General Assembly General Debate opened this Monday, the leaders of African countries delivered remarks that had many important statements and the leaders themselves were observed at notable “side events”.

Generally, the leaders stated their support for the post 2015 climate agenda and their unequivocal support for the 17 Sustainable Development Goals (SDG’s). In addition they raised concern for the migrant crisis and the underlying conflict and issues underlying this crisis.

Second, the continued viability of the United Nations in the contemporary era with its seemingly constant conflict; the issue was articulated by President John Dramani Mahama of Ghana: “The world that was in 1945 does not exist now in 2015, so the visionary Organization that was formed to meet the needs of that world must now be reformed to meet the needs of this one.”

The leaders all believe that United Nations focus on the Continent must continue. Even though the countries are showing new economic growth, it would be premature to remove UN sponsored special financial structures at this time. They want to see a period of sustained economic growth before these tools are removed.

Probably no issue consumes the leaders of Africa than terrorism and violent extremism. The rise of these violent groups and their terrible behavior requires a response that is not only direct and strong but it will require everyone working together. In that vein, the African Union must be strengthened and reinforced to be the frontline organization bringing together local powers against this scourge as well as working on other fronts. In addition, African frontline nations have had experienced fighting the terrorists and their knowledge should be shared and studies. President Ismail Omar Guelleh of Djibouti is strong supporter of this:  “In most countries of our region, this painful experience has enabled us to develop knowledge of the workings and practices of all the terrorist groups. And this deserves to be shared.”

Probably no leader had a bigger stage this week than Muhammadu Buhari, President of Nigeria. Making his debut appearance at the UNGA since he was elected president, Mr. Buhari also appeared the next day at the high level meeting chaired by US President Barack Obama on countering terrorism and violent extremism.

“Boko Haram’s war against the people of Nigeria, Chad, Niger and Cameroon may not attract as much worldwide attention as the wars in the Middle East but the suffering is just as great and the human cost is equally high,” the significance of this insurgency is not lost on the President:

Faced with an ongoing and resource draining insurgency with Boko Haram, Nigeria has joined forces with its neighbors to form a joint task force to deal with the violence. “We have established a multinational joint task force to confront degrade and defeat Boko Haram. We have driven them away from many of their strongholds, killed or captured many of their operatives or commanders and freed several hundreds of hostages, “said President Buhari.

Judgment is still out with respect to the resolution of the crisis of the nearly 300 schoolgirls kidnapped by Boko Haram “One of our major aims is to rescue the Chibok girls alive and unharmed. We are working round the clock to ensure their safety and eventual reunion with their families. Chibok girls are constantly on our minds and in our plans,” he stated.

While these issues will not go away quietly, Nigeria is beginning a parallel effort on the inequalities due to corruption, massive unemployment and previous government policies favoring the few to the detriment of the many.

As the debate reaches its endpoint in the next few days, there is a strong belief by veteran diplomats that African countries will continue to put a memorable imprint on UNGA 70. 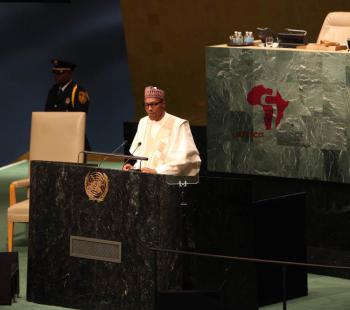