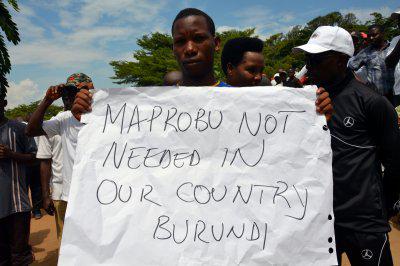 The entire membership of the United Nations Security Council arrived at Bujumbura, Burundi on Wednesday, trying to determine what—if any--action to take there, or what recommendation or conciliation to encourage, to curb repeated violent clashes between government supporters and various opposition groups. They were greeted at the airport by various dignitaries—including Burundi’s U.N. Ambassador Albert Shingiro and U.S. Ambassador to Burundi Dawn M. Liberi, as well as the Mayor of Bujumbura. The Council is traveling to Burundi for the purpose of assessing the situation which has led to the clashes, since President Pierre Nkurunziza’s election to an unprecedented third term.

Nkurunziza had been elected to that term, after having Burundi’s constitution amended to allow it, in contrast to the previous limit of no more than two (2) terms. This had led to extreme displeasure on the part of the U.N. and various major powers, who had warned the President not to attempt the third run for President. Nkurunziza, however, obviously had other ideas.

Mr. Nkurunziza’s supporters were much in evidence—both by their presence and vocally—at the Council’s arrival at Bujumbura Airport on Wednesday evening. They carried banners of support, emblazoned with the legends “No need of A.U. forces in Burundi” and “Stop MAPROBU”. The former slogan referred to the proposal to send peacekeeping forces under the aegis of the African Union. The latter acronym referred to a proposed U.N. peacekeeping mission that has not even as yet been established.

"Full support to our professional defense and security forces"

"All challenges must be faced through Inter-Burundian dialogue"

"genocide is not a political game"

In addition to all the demonstrators at the Airport, other crowds of demonstrators lined the road which heads West, in the direction of the Democratic Republic of Congo.

On Friday, the Security Council delegation is expecting to meet President Nkurunziza in Karuzi, capital of Burundi’s central province of the same name. Also on Friday, there will be a press conference at the Grand Hotel du Lac Tanganyika.