Tupperware: A Not So Trivial Pursuit 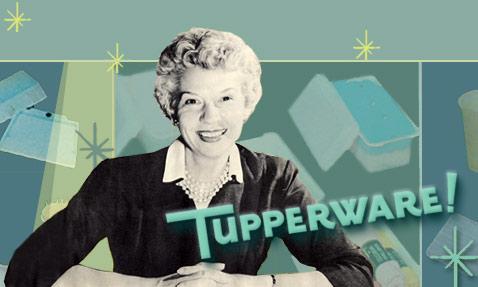 Some of you may find this piece rather trivial in the big scheme of things.  However, it is not trivial.  It reflects the status of women post WWII in the early 1950’s.  Remember those Tupperware parties where women invited friends to their home for a social event combined with sales?  Well, those plastic storage containers (that you “burped”) sat on store shelves until Earl Tupper, the inventor, met Brownie Wise, a divorced (my goodness!) single mom who was working for Stanley Home Products.  Wise invented the marketing strategy of parties in the home, recruiting thousands of women into the workforce.  She developed the idea of filling the bowls with liquid and throwing them across the room to demonstrate their effectiveness.  She showed moms how to “burp” the bowls to create a vacuum.  Her talent created the corporate culture of Tupperware and she became a household name.  However, Tupper had numerous creative differences with Wise and was probably jealous of her celebrity status.  He fired her in 1958, wrote her out of the company’s history, and left her with one year’s salary.  She died in 1992 at age 79 from cancer, and unknown.

Brownie Wise built the Tupperware Empire and then was rudely and with malice cut out of it.  It is doubtful such an event would be allowed to happen today.  While so-called “equality” for women has progressed since then, there is still a long way to go.  Looking at our own state of New Jersey gives us a good idea of how far the path actually remains as well as cultural biases held by the women themselves:

So, I have to ask myself why only women have to choose when it’s “the right time?”  Men don’t seem preoccupied with concern about their children defending them and themselves.  They expect everything to be held together by their wives at home.  Why do our present female legislatures believe they have to make the choice and decision?  Why can’t they depend on their husbands to hold things together?  Yes, women are held to different standards, at this point and have not been permitted to build connections with big sponsors because it remains largely a man’s world.  These are just a couple of the barriers that need to be removed as women progress in their fight for equality.  It is not yet an equal world and many of the old beliefs and standards continue being reinforced. Women are different from men in temperament.  Political campaigns are vicious.  There are genetic differences between men and women in this respect.  However, the “evolution” of “people-kind” does not have to remain static.  Women right now limit themselves by believing they must make the sacrifice for family (which no doubt is so engrained, it will take hundreds of years to fully change).  But, there is always the one or two where there is a deviation in genetic make-up and that will be passed on as environment, necessity, and engrained cultural beliefs change.