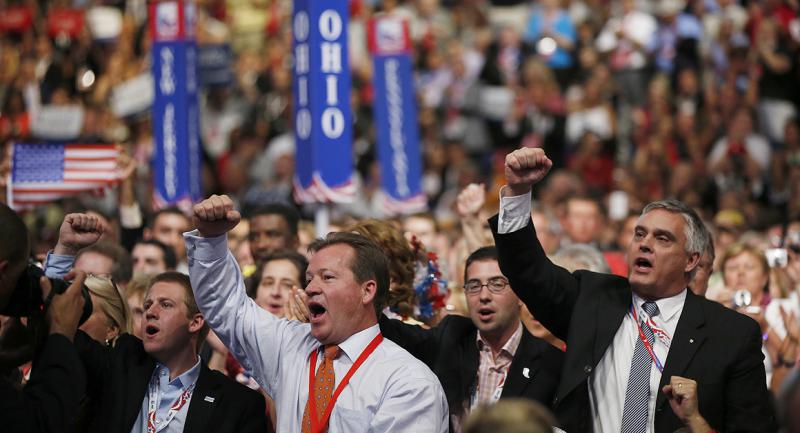 Watching the presidential conventions and the news, it seems like the world has gone quite mad.  At the Republican convention, the most extreme statements got the highest level of applause.  Why? Because the statements are honing in on the anger and anxiety of the Republican membership.  Stagnant wages and terrorism has fueled the fire.  Conservatism and decency have been pushed aside as the membership tries to deal with what appears to them to be extreme social and racial changes.  The world as they know it seems to be ending.  Although no one wants to believe or reinforce the idea that white supremacy is over, I observed a sea of white faces at the convention although Trump delegates insist African-Americans are welcome.  After the 2012 Republican campaign, the party was supposed to reach out to African-Americans and other minorities, but instead seems to have gone in the opposite direction. It might be logical to assume that if Trump did not get the nomination, it would not have gone to the other candidates but to someone with Trump characteristics.  Consider these quotes from high statue individuals at the convention: “We should frankly test every person here who is of Muslim background, and if they believe in Sharia, they should be deported” and “When did any other subgroup {white} of contribute more to civilization?”

A second factor is the news media.  We say we need “conversations” in this country to change the path of police executions and excessive-force deaths of African-American males.  We talk about transparency regarding the truths and causes of a nation divided racially and politically to temper the fear and hate.  The media can chose to add to the chaos or to reveal the truths.  It seems as though the media has chosen to hype the chaos, helping to fester the fear, anger, and hate.  Differences are highlighted and our commonality torn apart.  Peaceful gatherings are ignored, even if thousands of people show up; not considered worthy of coverage.  Media decides what news is worthy to report and the presence of cameras changes everything.  A peaceful protest in Newark that lasted three hours had the protestors thanking police and posing for pictures.  The TV cameras didn’t show up until almost the end.  Showtime.  A fraction of the group gathered around the cameras to put on a Narcissistic performance: screaming, anger, fear, hate, and violence.  Is this news coverage or performing arts?  And how much damage are we doing to our national psyche?  To add insult to injury, media runs 24/7, so we can take it in over and over and over.

A third factor is the number of times Trump puts his foot in his mouth.  How much trouble will the US get into if the country’s leader makes statements that he has to consistently deny later because people supposedly misinterpreted what he said or he was using sarcasm?  How do you take back a nuclear attack because a leader acts first and others think for him later?  Trumps comments about the Second Amendment, Hillary, and the appointment of new justices to the Supreme Court created a fire storm.  I don’t think others could explain away Trump’s actions because he was given the nuclear codes with the same double-speak they used for the Second Amendment guffaw:  supposedly Trump was “obviously” talking about “a strong political movement within the Second Amendment and if people mobilize and vote, they can stop Hillary from having this impact on the court.”  The “right to bear arms” was not meant just for the NRA.  It was meant to give our country the right to defend itself with a military.  It’s the same type of interpretation of “we” as in “We the people…”  The “we” referred to the attributes of the founding fathers: white, Protestant, male, wealthy landowners.  In addition to people “misunderstanding” Trump’s statements, it was revealed that the predatory auto-renewal issue has entered the presidential race.  A supporter contacted CNN to report he couldn’t cancel his recurring contribution on the official campaign site.  This is what the investigation found:

This set-up creates an environment that reflects lack of transparency and a lack of ethical business procedures.  In addition, not being able to stop the donations could put a person over their maximum contribution limit allowed by federal election rules.  The spokesperson for the Trump campaign was asked if a person reaches the limit if their donation would be declined.  The question was never answered.  The issues in the investigation were said to be not true.  When asked for more detail, the spokesperson said the information had been provided.  The donation site may even be breaking laws in states who have passed auto-renewal laws.  Not a good reflection on the “Donald.”

So where does this all leave us, Republicans, Democrats, and Independents?  There are people who will vote for Donald, for Hillary, or an Independent.  However, if we look back at the 2000 election, the people who voted for Ralph Nader because they disliked Al Gore, put George W. Bush in office.  Granted, people want to vote for someone they are proud to support regardless of the outcome.  Most people are not “practical” voters and you can’t make rational that which is irrational.  Defining who they are is more important than what some describe as “the lesser (or greater) of two evils.”  Some believe voting for an Independent will send a message and not compromise one’s principles.  But that could lead to the same type of upset as 2000.  Those voters took a risk that didn’t pan out.  Can we risk the same?

The lesson here is VOTE.  Don’t stay home or ignore the day.  At least stand for something.