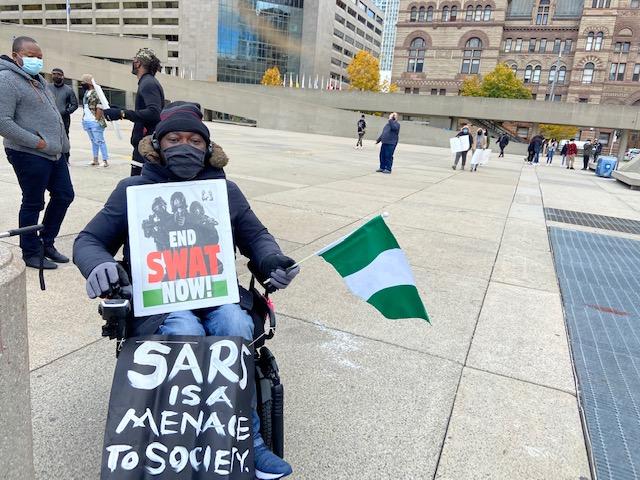 Nigeria celebrated its 60th year as a country on October 1, 2020. But the entire month of October 2020, is a month that has gone down in the history of Nigeria, as an unforgettable month. This is because few days after the Independence celebrations, precisely on 10th October 2020, Nigerian youths staged protests in strategic areas in Lagos namely, Lekki, Ikorodu and Oshodi.

By the next day Sunday 11th October 2020, their contemporaries have replicated the protests in various states such as Edo, Ogun, Abuja. And by Monday 12th October, about 4 other states have joined namely, Enugu, Port-Harcourt, Kano and Edo.

The protesters had only one demand, an end to SARS an arm of the police force, who had gone rogue and committed several heinous crimes against innocent citizens and arrested persons, who were either killed or maimed across the country. Falana Falana as a lawyer, presented a 5-point demand to the government named 5for5, which Lagos State Governor Jide Sanwo-Olu took to Abuja on Monday 12th October and presented same demands to President Buhari, who received it and promised to look into it and action on some of it.

The protests, though very peaceful and organized, was characterized by blockages of the roads, which caused serious traffic spanning hours on the major roads in these cities. By the next day, 17 states in Nigeria had joined the protests, though the patterns were the same, no violence, music, free food, free drinks, and yet they achieved so much attention.

The protests were aided by young and well-meaning Nigerians, corporate organizations joined in the protests anyway they can through distribution of money, IT support, food, medical support etc. some even provided tents for the protesters to sleep on the protest grounds.

Though the protesters said they had no leaders, when government tried to dialogue with them, however OmonDede show can tell you that the protest was championed by the following individuals, Aisha Yesufu, FK Abudu, Mr Macaroni, Feminist.co, Samuel Otigba, Moe Odele, Adetolaov, Aproko doctor, Rinu Oduala, Funmi Oyatogun, Eby Akhigbe, Temitope Majekodunmi, Falana aka Falz the Bahd Guy etc.

These young people threw in their professional knowledge, the contacts, time and money to ensure the protests were organized across states. Funds were disbursed daily, security mobilized in any area across Nigeria where hoodlums tried to disturb the protests, Ambulances were provided for injured or unhealthy people at the protests, and the amazing thing was the fact that accounts of money received and expended was given daily.

It was amazing, as Nigerians united irrespective of tribe, religion, politics, they helped themselves, provided succor for the homeless, food for the hungry, help for the needy and even prosthetic legs for two disabled individuals who joined in the protests. Above all, the shunned the frantic efforts of the government to dialogue with them and end the protests. Though commuters didn’t enjoy the disheartening traffic, yet no one complained because they knew the protesters were fighting for the good of the country and the common enemy was the government.

Things took a different turn on 20th October 2020, when the Lagos state governor Sanwo-Olu suddenly declared a curfew from 4pm of that day. When the protesters complained that the timing was too sudden, the curfew was extended to 8pm same day, citing cases of violence against harmless individuals by hoodlums who had hijacked the process. But precisely at about 6pm, soldiers stormed the protest grounds in Lekki and ordered the protesters to disband, they refused and sat on the floor. They also flagged the Nigerian flag and started singing the National Anthem, when the soldiers saw they didn’t want to leave, they opened fire and shot into the air. But not at the protesters, however as they scampered for safety, some of them were struck by the bullets which were dropping from the sky where they were shot at. This led to several injuries, which led to the death of two confirmed people and several unconfirmed others.

There are also unconfirmed reports that the solders carried away some dead bodies, to hide the truth, this is still debated as the burden of proof is on the claimants.

Oke-Obi Enadhuze, Jimoh Isiak, Chijioke etc, are some of the names of the people who died during the protests and the hoodlums attack in Police stations and on other government facilities in Lagos and across the country.

However, OmonDede show has put together a look at some of the videos of the protests and before things went awry.

@moe says “People in Lekki sitting on the floor, signing the national anthem & waiving the Nigerian flag just a few minutes before fire was opened on them”.

@lawrence says “One of the survivors of #LekkiMassacre2020 thank God he is alive to tell the story”. #EndSARS

@saint says “This is unfair. No one deserves to die like this. We didn’t do anything wrong!!!” As we show another victim of the Lekki shootings, as his brother screams in agony over his elder brother’s dead body.

@uncleghost shows the video of people who were brutally killed in the massacre.

In reaction to the #EndSars protesters demands, every state governor was mandated to set up a judicial panel of enquiries into the series of human rights acts perpetrated by SARS and other police authorities. The panel in Lagos sits on Tuesday, Fridays and Saturdays in Lekki, Lagos and the stories of extortion, abuse, brutality and killings which several individuals have petitioned the police and SARS with are nothing short of heart breaking.