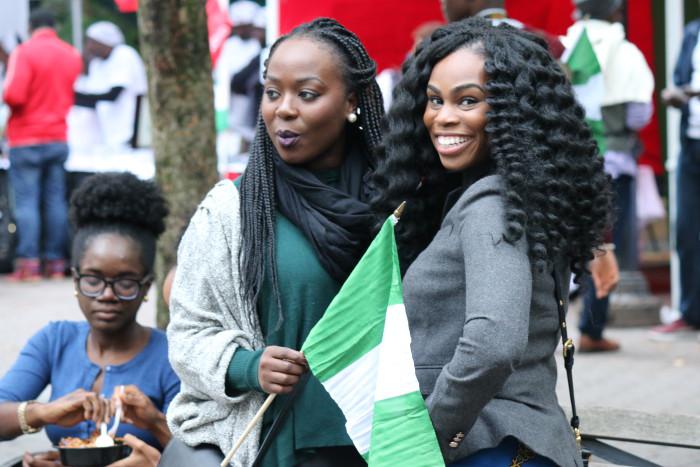 Nigeria's Independence Day Celebration took a new turn this year with fewer people attending the parade. This can be attributed by two factors: the Ebola epidemic and slight downpour of rain. This year’s event was a day event, and was held on October 11th at the heart of New York City, precisely around 46th street, where all participating organizations gathered on the park to celebrate and show case what they had on offer. The parade took place on the same day New York's John F. Kennedy International Airport began implementing the U.S. Center for Disease Control's enhanced Ebola screening. The five U.S. airports slated for special screenings (JFK and Newark-Liberty International in the New York area, and the hubs in Chicago, Atlanta, and Washington, D.C.) account for more than 94 percent of travelers from the most affected countries, which are clustered on Africa's west coast. Because of this, most people were afraid, there being the likelihood of being exposed to people who might be suffering from the Ebola disease symptoms. This is because many people would usually travel all the way from Nigeria to attend the yearly event. Additionally, these Nigerians, in the past, had friends across the continent who would also join them in attending the annual parade, with quite a few of such people coming in from Guinea, Liberia and Sierra Leone which are the most affected by the epidemic.

The march past began around noon, slightly later than scheduled because of the downpour of rain in the early hours of the morning and the rather unfriendly winter cold. Expectedly, my organizations were represented at the annual event. The parade march past started at Second Avenue off 54th street, down to Second Avenue off 44th street, where the Nigerian Consulate officials waited to welcome all participating organizations, individuals, and friends of Nigeria. The parade proceeded to the 46th street where all participating organizations and persons were stationed to watch entertainment by various artists and entertainment groups. Mascot presentations were made by the representatives of different organizations from the government who came to witness the event.Africaconnect joined other organizations to show case the beauty of Nigerian culture and what they represent. Africaconnect had flyers from the Office of the Mayor, which they shared to all and sundry, educating them on all they needed to know about the Ebola Epidemic. They also interviewed people at the event on their opinions concerning the parade, Nigeria and contemporary issues.

Generally, the event was glorious and blissful because of the general upbeat mood of all attendees that graced the event. Nigerians, who are generally known for their lively nature and exuberance, defied the rain and weather to attend this year's colorful ceremony.