140+ Heads of State - A New Generation of Sustainable Development 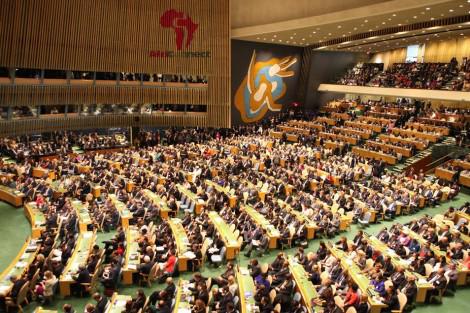 The 69th UN General Assembly took place in New York, from the 22nd September to the 3rd of October 2014. More than 140 Heads of State or Government were present.  Civil society leaders, CEOs (Chief Executive Officers) and other influential global figures also attend this important rendez-vous. The new session of the General Assembly was organized within a pivotal period for global efforts to defeat poverty and adopt a new generation of sustainable development goals. Once again, leaders are calling on “Actions”.

Leaders and civil society activist have all featured atrocious attacks on civilians, including children.  All have dangerous sectarian, ethnic or tribal dimensions.  And many have seen sharp divisions within the international community itself over the response. Many questions, solutions and projects were shared. Together, Ministers, Delegates and Members States came across to try to address the horrendous violence in Syria and Iraq, where conflict and governance failures have provided a breeding ground for extremist groups. It was also an occasion to welcome the growing international consensus to act against this serious threat to global and regional peace and security.

As part of the peace making initiatives, it had been acknowledged that, violence continues in Mali, South Sudan and the Central African Republic.  One high level meeting was organized to not let these crises be forgotten and decisions have been taken to strengthen the peace. Part of them is the new mission that will be lead by UN. In Libya, order is breaking down. In Nigeria, the advances of Boko Haram grow more alarming every day.  In his main speech to the Member States, Ban Ki Moon calls on world leaders to unite and uphold human dignity, the rule of law and the principles of the United Nations Charter. The United Nations is determined to meet this test of international cooperation and solidarity.  “We will need to be as bold and courageous as those who are already fighting on the frontline” said Ban khi Moon.

According to UN Secretary General, Ebola is an exponential crisis that demands an exceptional global response. And the United Nations will be the centre for action in responding to the outbreak. He places a special focus on Ebola virus disease, which is a cause of huge concern in West Africa and beyond. The Security Council convenes an emergency meeting on the outbreak.  World Health Organization (WHO) Director General Margaret Chan joined the UN SG to outline the international action plan to contain this threat.

The Climate Summit convened had two goals:  to mobilize political will for a universal and meaningful climate agreement next year in Paris; and second to generate ambitious steps to reduce greenhouse gas emissions and strengthen resilience. “We are anticipating an impressive turnout of leaders from Government, business, finance and civil society. Most important, we are expecting significant commitments and progress.” A new voice joins the global climate advocacy efforts:  Leonardo DiCaprio. The world’s leading actors has also a long-standing commitment to environmental causes, including through his foundation.

Peace and Security Issues: The World is Facing Multiple Crises.

Each has its own dynamics, and requires its own approach and actions. This is to reconsider the role of the United Nations in tackling global threats and seizing opportunities for common progress. One of the main targets it still Africa.  Generous contributions are being announced each day but it remains a lot of catching up to do to provide the health services, food, water, sanitation and supplies that are needed.

The week opened and close with two remarkable public gatherings on the streets of the host city, New York: the People’s Climate March on Sunday, (21 September), and the Global Citizen Festival on Saturday, (27 September). The Global Citizen Festival in Central Park was organized to thank thousands of young people for helping to fight hunger, protect the planet and promote the rights of women and girls.

Every day there is a delay for concrete actions. As a main result of that: the cost and the suffering are growing exponentially. The more we delay in real actions, the more we will pay in lives and in money.