Meeting the Leaders, Facing the Press: Security Council in Burundi and Addis Ababa 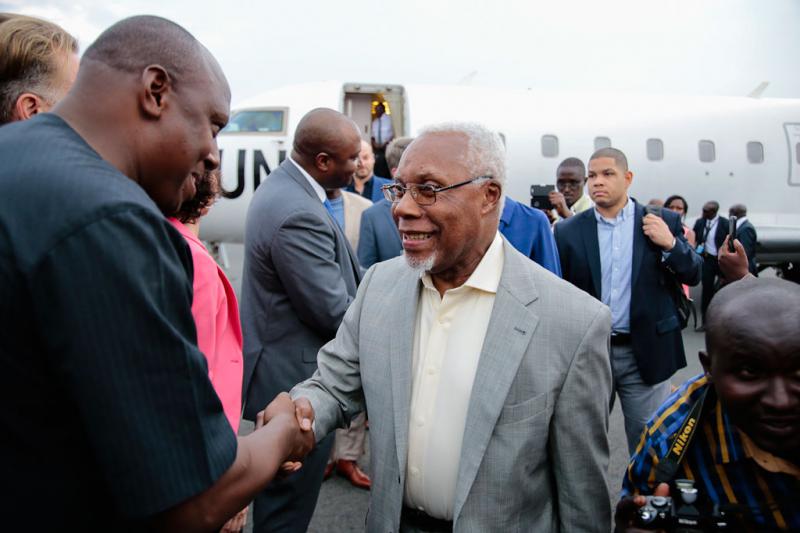 The U.N. Security Council Mission to Burundi, which arrived in the capital city of Bujumbura on Thursday, 21 January, found a country wracked by violence, repressed conflict, and even some elements of ethnic strife. On the second day of their Mission, Friday, 22 January, they met with President Pierre Nkurunziza, as well as with two ex-Presidents and various civil society leaders. And finally, in the evening and just prior to their departure for Addis Ababa, they met with the press...or at least tried to do so.

The day’s first meeting was with two former Presidents of Burundi, Jean-Baptiste Bagaza (1976-’87) and Domitien Ndayizeye (2003-’06). Both are living in the country, but each was overthrown and his presidency terminated by military force.

The ambassadors also met with Leonidas Njimbere, who had been Chief Burundian Negotiator of the 2000 Arusha Accords. The Arusha Accords were an agreement between various contending Burundian parties, signed at that city in Tanzania, and witnessed by such prominent African leaders as Nelson Mandela and the presidents of the three Anglophone East African republics, Kenya, Tanzania and Uganda, as well as by Secretaries-General Kofi Annan of the United Nations and Salim Ahmed Salim of the African Union. The two Burundian ex-presidents were said to have advocated the deployment of an African Union Peace Force, for security reasons. The delegation also met with civil society organizations, which were said to have appeared to be pro-government. These parties took the opposite view: there was no need for the deployment of any African Union troops, since the government had the country’s security Situation well under control.

Later that day the Council met with President Pierre Nkurunziza, at his home in Gitega, capital of Burundi’s Central Province. The President assured them likewise that there was no need for any peacekeeping force. There was no violence taking place, and Burundi’s domestic peace and security were not illusory; they were real.

Apparently, a Press Encounter had been scheduled for 9:30 PM at Bujumbura Airport. It did not take place, or at least not quite as expected. The journalists were told to go home. The President’s Press Spokesperson, Albert Nasasagare, arrived and likewise told the press that there would be no meeting with them. When U.S. Ambassador Samantha Power arrived, however, she insisted upon speaking with the journalists, and answered at least some of their questions. Then the Ambassadors got on their plane, and flew to Addis Ababa for meetings with the African Union at its headquarters there the next day.

On arriving in Addis Ababa, the Ambassadors discussed the situation in Burundi with the Special Representative of the Secretary-General to the African Union, Haile Menkerios. Menkerios said that  “…getting Burundian stakeholders to participate in dialogue about practical ways forward was key to resolving the political situation”.

A joint meeting of the U.N. Security Council and the African Union’s Peace and Security Council (PSC) was held—co-chaired by Uruguay as Security Council President and Equatorial Guinea as PSC President. Some of the speakers advocated a quick deployment of the “African Prevention and Protection Mission in Burundi” (MAPROBU). Others noted that such a move would be useless—and possibly even counter-productive—without the cooperation of the Burundian government. They noted that President Nkurunziza “did not seem inclined to accept any A.U. deployment”. Some of his ministers, on the other hand, had said that the issue was “being negotiated with the A.U.”

Ambassador Power, in a meeting in Addis Ababa with Ethiopia’s Foreign Minister Tedros Adhanom Gebreyesus, discussed the problems facing Burundi, and the need for “an inclusive political dialogue outside Burundi”, as the only realistic solution.