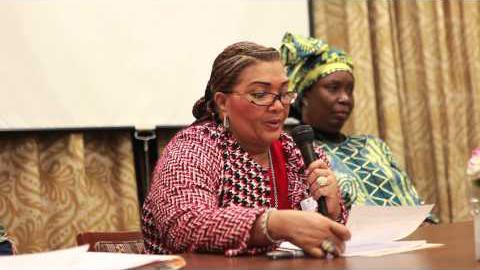 The venue was the famous TAJ Hotel, The Pierre, Manhattan, New York. The event was the official launch of MOVING FORWARD, the biography of Goodluck Ebele Jonathan, President and Commander in Chief of the Federal Republic of Nigeria.

The book launch and transformation agenda forum hosted by the House to House Campaign for Democracy, a political organization that promotes democratic culture in Nigeria, was strategically scheduled to commemorate President Jonathan's two-day visit to the 69th session of the United Nations General Assembly (UNGA 69) in September, 2014.

"My job here today is to drop the check and walk away," said Nwachukwu, who did not walk away but spoke eloquently about his company support and public work partnership with the Jonathan administration.

In his opening remarks, the chairman of the book launch and transformation agenda forum, Chief Dr. Reuben Mietamuno Jaja, the Ama-Opu-Senibo of Opobo Kingdom, said that the need to educate the international community on the many achievements of President Goodluck Jonathan bore heavily on the decision to launch the book in the United States. "The best place to share this knowledge is the Diaspora, and of course the author is a Diaspora Nigerian," he said

Unfolding the inter-continental launch schedule of MOVING FORWARD, Dr Jaja said, "Europe is the next destination of the book launch and the transformation forum, and London is the city of choice. The grand finale will take place at Abuja."

Moving Forward is a compelling narrative about Dr. Goodluck Ebele Jonathan, one of the luckiest men on earth, who was at the right place at the right time. The 17-chapter book reveals Jonathan's life and includes his childhood, youth, academic preparation and career, as well as his love for, and marriage to Dame Patience Jonathan. The book also covers Dr. Jonathan's political career - the Bayelsa crisis and his ascent to the governorship of the state, the national constitutional crisis, and how he became the acting president of the federal republic. The book goes on to cover his election, his victory, and ascent to the presidency of the federal republic, his macroeconomic policy, foreign, and national security policy, and various challenges he has faced.

In an exclusive interview with the author, Dr. Mathew Uzukwu, I asked if it was fair to describe MOVING FORWARD as an unauthorized biography of President Jonathan. "I did not seek the consent of President Jonathan because my goal was to do an unbiased, factual narrative of his personal and political life," Uzukwu said.

The Transformation Agenda forum and book launch formalities were delayed untill the arrival of President Jonathan, who was accommodated at the executive suite of The Pierre Hotel. He could not attend the launch as he was preparing for his address at the United Nations General Assembly the next day.