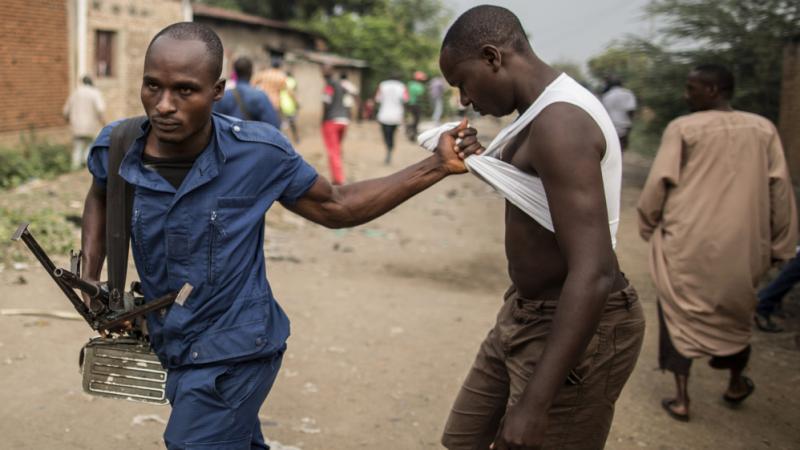 It is continental Africa’s fifth-smallest county, by area. Once a colony of two successive European powers, Burundi has become a venue for political violence, now in the process of degenerating into ethnic bloodshed. Like Rwanda, Burundi is about 85% Hutu, 14% Tutsi and 1% Twa (A small tribe of Pygmies). Rwanda, however—after suffering the greatest act of genocide since the Second World War (800,000—1,000,000 dead, in a mere 100 days, in early 1994), has been the recipient of lavish grants from numerous funding sources. It is more built-up economically, and has (along with Mozambique) joined the Commonwealth. But Burundi has become starkly different: at 10,747 square miles (27,834 sq. km.), it is just slightly larger that Rwanda. But it is less developed, less integrated into the world economy and community, with at least some ethnic tensions said to be bubbling [not far] below the surface.

The two countries were originally a single German colony, known as Ruanda-Urundi, prior to World War I. The Germans had a few fortresses in the double colony, but their only serious army in East Africa was in Tanganyika: Commanded by the highly-capable Colonel Paul Von Lettow-Vorbeck, it led the British forces under the South African General Jan Smuts (who some three decades later was said to have authored the Preamble to the United Nations Charter) on a merry chase for four years all over Tanganyika—and even once across the Rovuma River into Portuguese East Africa (now Mozambique). Thus, the Belgians were able to take advantage of the situation and invade the double colony in the Spring of 1916: Kigali fell to their forces on 6 May, and Usumbura on 6 June. These were the only World War Belgian victories over Imperial Germany, who had invaded their home country in 1914 in violation of an 80-year old Neutrality Treaty, and steamrollered they way across it in the process of invading Northern France.

But that didn’t end the country’s violent history…not by a long shot. Its entire colonial history is replete with occasional violent outbursts. They start with King Mutaga IV Mbikije, who was killed by his brother, whom he discovered “courting” one of his two wives. And it goes all the way up to [and beyond] Prince Louis Rwagasore: on 28 September 1961, he was appointed Prime Minister of Burundi. But…on 13 October (only 15 days later) he was assassinated in a restaurant bar in Tanganyika. Not the country you visit for its peace and quiet. But it did manage to achieve its independence, along with that of Rwanda (at the insistence of the United Nations Trusteeship Council), on 1 July 1962, just two years and a day after that of the Congo.

But the origin of its current problems, is the decision—and determination—of its President, Pierre Nkurunziza, to seek a third term as President. This was a violation of Burundi’s Constitution, and Nkurunziza solved the problem by the simple expedient of having his pliant Congress pass the necessary Constitutional Amendment. Thereafter, the President was overwhelmingly elected to his third term. This has led to increasing protests and, more recently, rising levels of violence—some of it clearly inter-ethnic.

On 11 November the Inter-Parliamentary Union issued a statement,  urging Burundi’s own Parliament “…not to fail its people or in its duty to represent and protect all of society as global concern over the increasingly fraught situation in the country mounts”. The very next day, the U.N. Security Council met and passed its Resolution No. 2248. It reaffirmed its commitment to the “sovereignty, political independence, territorial integrity and unity” of Burundi. And it urged the government of Burundi to cooperate with the mediation efforts of the East African Community (EAC) and the African Union, led by President Yoweri Museveni of Uganda.

But this did not return any semblance of peace and quiet to the troubled little country. A BBC story on 2 December wondered if ethnic conflict was about to break out in earnest. The U.N.’s Special Advisor on Genocide, Adama Dieng, said that “We can observe today in Burundi a clear manipulation of ethnicity by both the government and opposition”. Ominous words those, from one of the few unimpeachably unbiased observers. And UN Watch, the Geneva-based human rights organization, urged the U.N. to rescind its “absurd” election of the troubled East African republic. But to no avail: it was elected anyway, along with 17 other countries—several of them with doubtful human right records of their own.

The International Peace Institute, located just across First Avenue from the U.N. Headquarters, questioned whether the proposed African Union force, tentatively dubbed MAPROBU, was engaging in “coercive diplomacy”. And the Security Council itself, in a Press Statement on 19 December, urged the acceleration of President Museveni’s mediation efforts, and “took note with interest” of the prospect of the MAPROBU Force from the African Union. But President Nkurunziza only further escalated the situation, vowing to fight any African Union peacekeepers. And the U.N. Human Rights Commissioner, Zeid Raad al-Hussein, reported patterns of gsng-rspe in Burundi, and the possible existence of several mass graves. This was the turbulent powder keg of a country in which the United Nations Security Council arrived, on 21 January, to assess the situation.