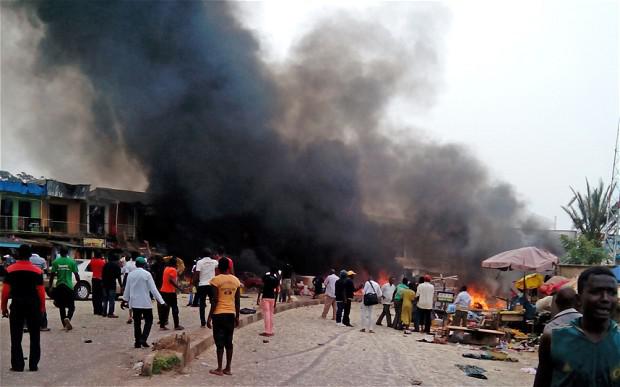 BBC  Report:
Boko Haram militants have attacked a rural market in the north-east Nigerian town of Mainok, killing dozens of people, officials and witnesses say. Gunmen shot at traders and customers as they raided the busy market for food supplies on Friday. The number of casualties is not yet clear, with some reports suggesting as many as 30 people were killed.
Boko Haram has taken control of a series of towns and villages in north-eastern Nigeria in recent weeks. Authorities have struggled to defeat the militant Islamist group, which has been waging an insurgency in Nigeria since 2009. The BBC's Will Ross, in Lagos, warns that parts of north-eastern Nigeria are slipping further and further out of the government's control, creating a growing humanitarian crisis.
Reuters news agency quotes two security sources as saying that at least 36 people, including 13 gunmen, were killed in the gun battle, which continued into Saturday. "Thirteen of the terrorists... were killed, some of them fled with gunshots and our colleagues are already on their trail. Unfortunately, 23 civilians died in the attack," one source is quoted as saying. The militants are well-armed and often wear military uniforms. Eyewitnesses described scenes of pandemonium as the busy market came under attack in broad daylight on Friday, our correspondent says.
One resident said that some of those running for safety were killed after being hit by cars speeding away from the area. He said that many soldiers and civilians ran away into the bush. Mainok is located some 56 km (35 miles) outside of Maiduguri, the capital of Borno state.
In May 2013, President Goodluck Jonathan imposed a state of emergency in the northern states of Borno, Yobe and Adamawa, vowing to crush the Islamist insurgency. Thousands of people are displaced every week by violence in the north-east of Nigeria. But Boko Haram, which translates as "Western education is forbidden", has stepped up attacks against civilian targets ever since the Nigerian military offensive began last year. It frequently attacks schools and colleges, which it sees as a symbol of Western culture, and was behind the kidnapping of over 200 schoolgirls from Chibok in Borno state.
Earlier this week gunmen stormed a teacher training college in the northern city of Kano in a suspected Boko Haram attack, killing at least 14 people. The New York-based Human Rights Watch says more than 2,000 civilians have been killed this year